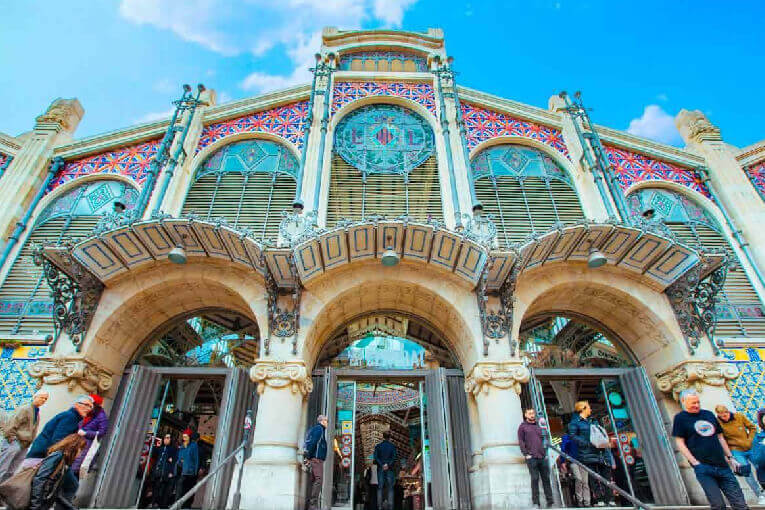 10 facts of the Mercado Central you did not know

The Mercado Central of Valencia is a place of worship for lovers of gastronomy.

A sacred temple in the heart of Ciutat Vella (old town), where the traders offer you the chance to immerse yourself in this unusual world of taste, colours, and aromas, which we call the Mediterranean Diet.

With more than 8,000 square metres, it is Europe´s largest market and is listed as one of the most beautiful markets in the world by the prestigious British television channel BBC.

Although the building is just over 100 years old, the trading tradition of the place where it is located dates back to the years of a city (Balansiya) under Muslim rule.

It is therefore not surprising that this enclave has become a magical place full of interesting things, legends, and many stories to tell.

Will you join us to get to know them?

The Central is a market that goes beyond the food sector and becomes the flagship of Valencian gastronomy thanks to the special link between the orchard and the sea.

After centuries of trading in what is now Plaça del Mercat, an open market was opened in 1839, known as the New Market.

But this market did not have a long history.

Soon this building proved to be insufficient for the city's commercial activities and in 1910 the city council decided to launch a competition to select a new market project.

In the same year, the demolition of the old building began, and King Alfonso XIII went there to perform a solemn act, striking several times with a pickaxe on the part of the wall at number 24 of Plaza del Mercado.

Six projects were submitted for the contest, among which the Art Nouveau proposal by architects Alejandro Soler March and Francisco Guardia Vial was selected.

After 14 years of work, the Central Market of Valencia, which we know today, was inaugurated in 1928.

2. A true cathedral of the senses in Valencia

The spectacular character of the market building is undisputed and makes it one of the most visited attractions in the city of Valencia.

The market is perfectly integrated with two other very important enclaves with which it shares its location: the Lonja de la Seda (Silk Exchange) and the Los Juanes Church.

Its exterior could well be that of an Art Nouveau cathedral, with such characteristic materials as iron, glass, and ceramics.

Among its domes, the one in the central area stands out with a height of 30 metres. Although this vault has the same importance as the popular weathervanes of the parrot and the fish, which blend in perfect harmony with the sky of the towers and bell towers of Valencia. 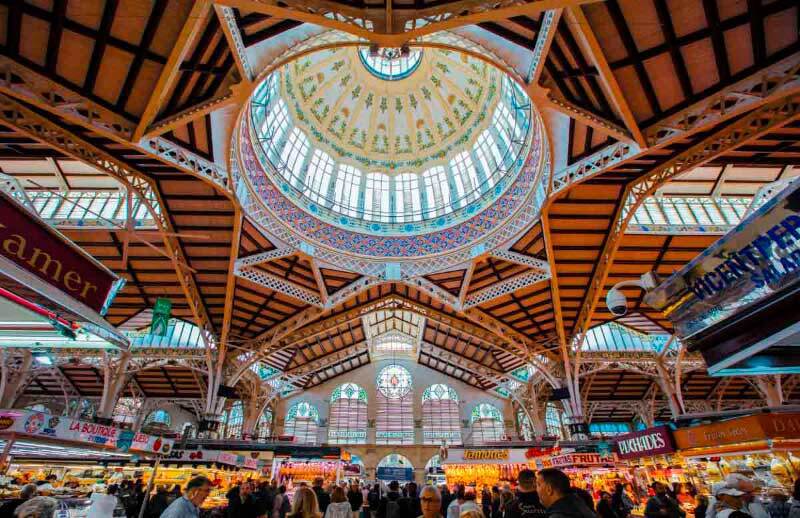 It is one of the slogans of the market traders.

In the more than 300 stalls (known as "paradas") you can buy an extraordinary variety of products, from the most traditional to the latest products typical of avant-garde cuisine.

The fruit and vegetables of Valencian gardens and fields are characterised (as it could not be otherwise) by a truly unique variety.

As for beans alone, for example, you can choose between roget, bajoqueta, ferradura, bajoca or garrofó fresco, the latter being essential for a good paella.

Although others, such as tomatoes, are not left behind, with exhibits such as the tomato from the village of Perelló or the Valencian tomato and the popular snails, with the moro, cabrilla, cristiana or avellanet varieties

Also worthy of note are spices and aromatic herbs, ingredients that are widely used in Valencian cuisine: Saffron, laurel, juniper, pepper, mint, and cumin, to name but a few.

The range of local products sold here is so wide that even the Valencians themselves hesitate to distinguish them.

By the way, one last remark: did you know that there is an autochthonous cocoa in Valencia, the "cacau del collaret"?

4. You can make your purchase by clicking on a button

The city's clear commitment to technological development has been reflected in the Central Market over the years.

In the 20th century, in 1996, Central was already the first market in the world to digitise its sales and offer a home delivery service.

This commitment has been maintained over the years to the extent that it is now possible to place your order via the Internet and receive fresh goods anywhere in Spain and even in Europe.

This new concept of the market, which goes beyond the actual trade, makes this centre a meeting place where culture is also expressed.

And a good example of this are the art exhibitions, music and literature cycles within the market throughout the year, accompanied, of course, by many culinary events. 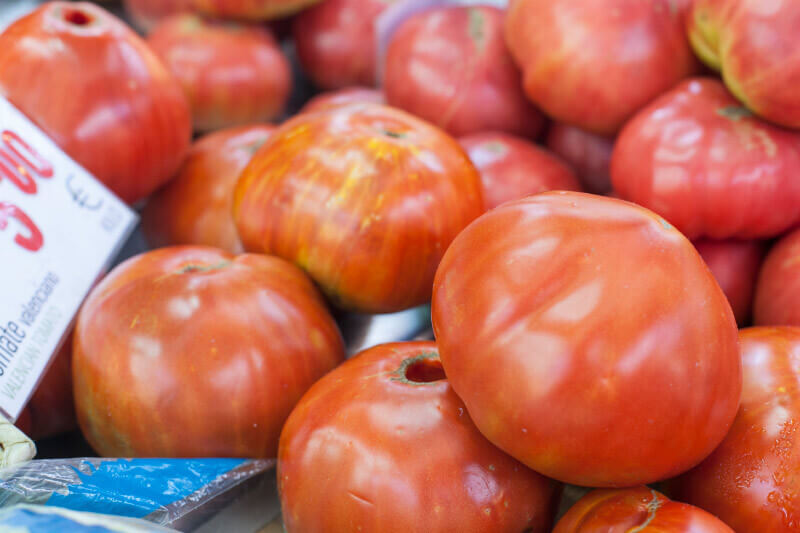 Seafood is very well represented in the market, with a wide variety of fish and seafood.

The peculiarity is that at some stands you can see live eels. The shopkeepers prepare them for cooking in front of the customers, following a tradition similar to other places in the world such as Singapore and Hong Kong.

6. A sensual journey within its walls

There are several restaurants in the market where you can sample the local cuisine in the form of tasty culinary creations that will take you on a journey of the senses.

The Central Bar, run by Valencian chef Ricard Camarena, is perhaps the most popular.

The kitchen offers tapas, portions and sandwiches made with the best products available on the stands every day, of excellent quality and truly exceptional taste.

You can see here you have another recommended visit to enjoy the essence of the market and taste its exquisite culinary offer.

7. You shop, the chefs cook for you

Look at the idea: Buy your favourite products at the market so that they can be prepared in the nearby restaurants.

Well, it's as simple as that: buy your favourite ingredients at the market stalls, take them to one of the participating restaurants, and for a small fee they will be cooked for you (beverages not included).

This is undoubtedly a very original way of tasting the rich flavours of Valencia, thanks to the paramount quality products purchased locally and prepared in genuine local style.

The Central Market: tales and legends of Valencia

We follow this list with a good part of the most popular legends surrounding this emblematic monument:

8. The Legend of the Parrot and the Pardalet

The fact that the parrot is mentioned for the second time on one of the domes is a sign of its popularity.

This weathervane, which crowns the dome of the Huerta, has its own name: the "Cotorra del Mercat" (Parrot of the Market).

Legend has it that the parrot and its neighbour, Pardal de San Joan, the weathervane of the Santos Juanes church, commented on the events of the city from above.

These figures appear in countless Valencian plays and other popular works that reflect the perfect contrast between the secular (the parrot) and the divine (Pardal).

9. A crocodile in the basement

The movement of customers and dealers in this forum has produced many stories over the years.

One of them tells how at the end of business day, when the hustle and bustle stopped, roaring sounds could be heard from the basement.

Nobody dared to investigate the origin of this mystery, but folk culture soon found the reason for it: A crocodile lived in the basement of the market.

Some even claim to have seen the animal with their own eyes.

It seems that there were very humble families from Aragon who, because of the uncertainty of their lives and uncertain future, went to the market to offer some of their children to a trader who needed an assistant.

There were times when the offer had no response, so the father was forced to abandon the child at the door of the Iglesia de los Santos Juanes Church, hoping that the gods would help him.

It is said that in this situation there was always a bona fide merchant willing to take care of the child, a sign of the city's hospitality.

A must for locals and visitors

At this point you have certainly added the Mercado Central to your list of Valencia's places of interest. 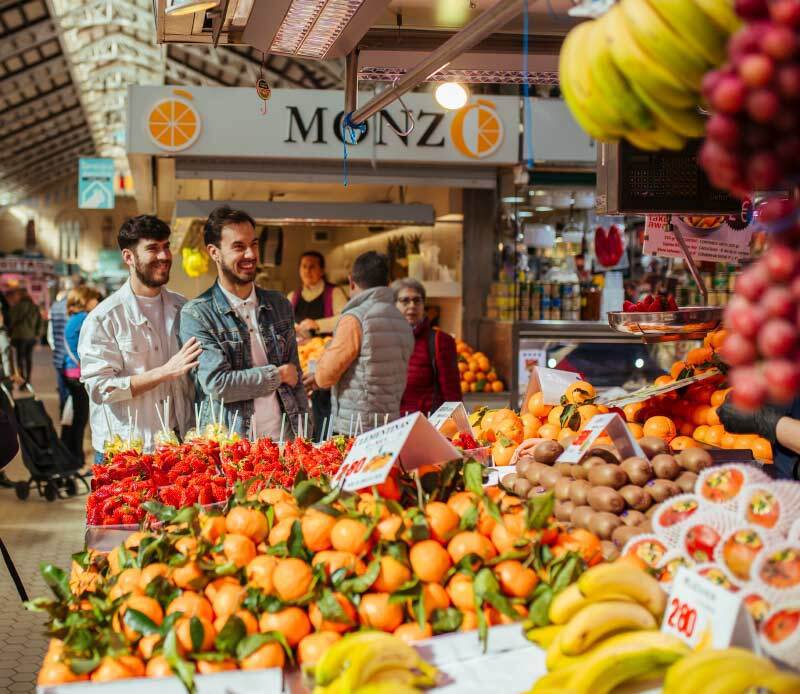 You should know that you can enjoy this gastronomic monument from Monday to Saturday until midday. Yes, here comes the last interesting fact: this market is not open in the afternoon.

The reason for this is that the traders start their day early in the morning to fill up their stalls with the products of the day. They go to the nurseries or the wholesale market to bring the best quality products to the Valencian tables.

The market is located in the heart of the city, very well connected by public transport. You can get there easily on foot, by bus or by underground.

So, if you are looking for a real gastronomic experience during your trip, the Central Valencian Market will provide you with that extraordinary combination of gastronomy and culture that is so typical of this corner of the capital of the Turia River.