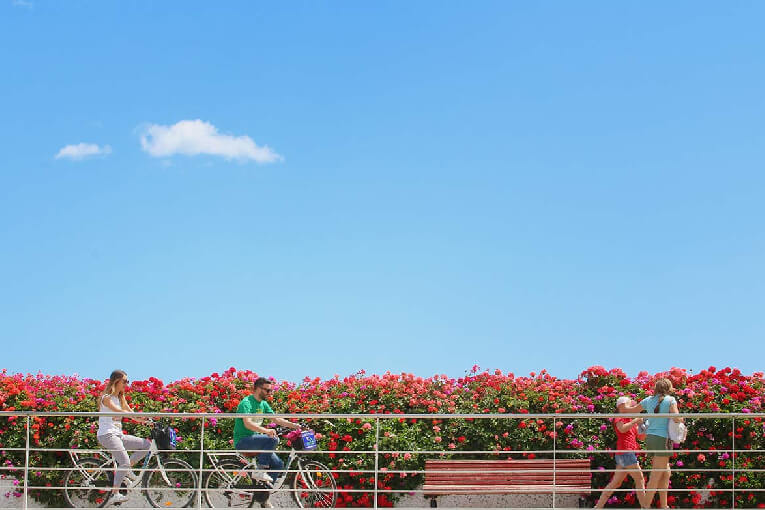 What are the colours of Valencia?

Yes, of course. If we are talking about the colours of Valencia and don’t mention orange, it’s almost a crime.

Yet there are many attractive colours that envelope you in the city, in a world of colour which is a real treat for the eyes. Just from wandering the streets you will realise the bounty of nuances that Valencia offers in its buildings, monuments, green spaces and natural areas.

A symphony of colours to capture with your camera and take a beautiful memory home with you.

A trip to Valencia through 5 colours

Although there are many colours in the city, we wanted to select five that are most present in Valencia. Here we go:

It is impossible to talk about Valencia without mentioning this colour (or delicious fruit) that means so much to the city.

Focusing on gastronomy, the best time to come and taste the delicious Valencian Orange (yes, our oranges have their own name) in full season is the month of December. From there until the days leading to the arrival of summer, in June, they are an ever-present in the city.

As you can imagine, there is a whole culture around oranges that can easily be seen. Thousands of orange trees (15,000 specifically) will accompany you on your walks, leaving that characteristic aroma and shady oases, essential for when the heat starts to hit.

With regards to the palate… take note of this: Agua de Valencia.

We can say without doubt that we have one of the most refreshing drinks in the country. It’s a cocktail that uses seasonal oranges, cava or champagne, a dash of gin and another of vodka.

Valencia is a sustainable city. It’s not just us who says it, the UN itself has declared Valencia a "Sustainable and Smart City."

To this effect, it has become the first European city to achieve this status and is the third in the world to obtain ISO and ITU certification. The number of green spaces in the city has had a lot to do with it.

You can find green, dotted with other colours, in the many parks of Valencia. The best example is the largest urban park in Spain: the Turia Gardens.

The Montforte Garden is not far behind either, its neoclassical style and layout almost transports you to another era. Here the green combines perfectly with the white of the marble in its statues and the lilac tones of the bougainvillea flowers.

Other places that are a must if you are looking for nature in Valencia are the Jardines del Real (of Muslim origin), the Botanical Garden, the Central Park and the Turia Gardens, the lung of the metropolitan area of ​​Valencia.

Being on the Mediterranean coast means blue is very present in the city, but not just on the beaches.

If you look up, you will soon realise that the Valencian skyline is decorated with a cobalt blue that is symbolic of the city. All this is thanks to the glazed ceramic domes that decorate the churches and old Valencian monasteries.

The largest of them all is that of the Iglesia de las Escuelas de Pías, a jewel of European classicism that you must visit. Others that stand out are the Museo de las Bellas Artes (both inside and out), the churches of Santo Tomás and San Felipe Neri and, of course, the blue domes of the Valencia Cathedral.

If we go inside La Seu (the cathedral), specifically its high altar, just take a look at the Renaissance paintings that decorate its vault to see the blue that represents the sky in which the Angel Musicians of the Cathedral play their string, air and percussion instruments.

We could spend hours and hours telling you the places where blue is king in Valencia, but we are going to leave you with one more to finish: the neo-Gothic chapel of the Ducal Palace of Gandia.

If you want to see blue in other shades, stop by the Central Market and the City of Arts and Sciences.

White, along with blue, were the colours with which architect, Santiago Calatrava, was inspired to design the City of Arts and Sciences. Arriving at the place you will see the imposing buildings of pristine white colour: the Hemisfèric; the Museum of Sciences; L’Umbracle; the Oceanographic; and the Palau de les Arts.

Una publicación compartida de •P A U L A• (@8happyworld)

Continuing on the theme of architecture, we are now heading to Veles e Vents in the Marina area, an ideal place to have a drink while enjoying beautiful views of the sea.

We cannot finish with white without mentioning another of the most traditional drinks: horchata, which, accompanied by some fartons (traditional confectionary sweets), make a delicious mid-afternoon snack.

Flowers provide a cheerful tone of varying colours in any corner of the city: in parks and gardens, on balconies, on bridges and adorning the entrances of buildings.

Here we are going to stop to show you the Bridge of Flowers, which also bears the signature of Santiago Calatrava. Although only inaugurated in 2002, this walkway is already an emblem of the city and a must-see thanks to the hundreds of flowers that decorate it.

Ok it's not a colour per se, but you get what we mean, right?

Exactly! It is a multitude of colours that mix in the streets of the city and make it a real living canvas.

Street Art is very present in Valencia, especially in the Ciutat Vella district, the Ruzafa and Cabanyal-Canyamelar neighbourhoods.

In Valencia you can see murals of all kinds, visit the IVAM (Valencian Institute of Modern Art) or participate in the art festivals that take place in its streets.

We have come to the end of this little trip through the colours of Valencia, but let's be honest: the best thing is if you come to the city to see for yourself and discover the many other wonders of Valencia.

We’re waiting for you!