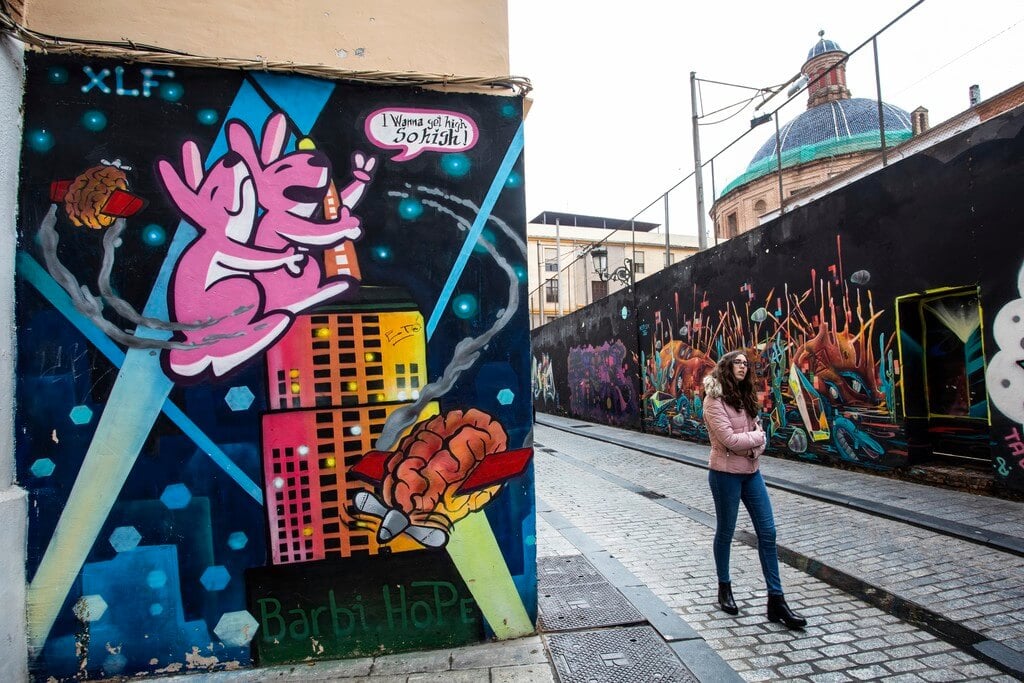 Valencia has a rich artistic heritage. But the collections deposited in the many museums and the notable architectural examples coexist with other plastic manifestations of outmost actuality. In Valencia art becomes a city and takes its streets and squares as an open-air canvas, ready to tell the most recent chapters of its fertile history. The district of Ciutat Vella and the neighbourhoods of Russafa and Cabanyal-Canyamelar are the ones that bring together the most proposals, in part thanks to the festivals in which street art is a backbone: Intramurs, Russafart, VLC Barris en Moviment... A few months ago, thanks to the work of some Spanish and Italian muralists in the maritime district par excellence, this last event demonstrated the capacity of these creators to tattoo the skin of the city, modifying it forever. The works can be visited in the triangle formed between Espadán 31, Pescadores 20 and Eugenia Viñes 101 streets.

We would like to propose a specific tour but, above all, we invite you to live your own. There are hundreds to discover!

The IVAM as an origin

The Institut Valencià d'Art Modern (IVAM) is one of the flagships of the city's museum offerings. Our route begins behind them. A large mural by Escif presided over by the enormous head of a unicorn recalls the demands of the local people, in an environment that pays equal tribute to the classical sculptures found not far away and the graffiti of the students of the nearest institute. In short, as the author acknowledges, "a painted wall is a wall erased, an act of psycho-magic, a crack in the system, a message of hope that reveals the possibility of working for a different world". Escif's career has been recognized with an exhibition at the Centre del Carme and with the design of the municipal fault in 2020, as it happened in 2019 with the duo PichiAvo.

Murals as a team and a lot of commitment

Just around the corner, don't stop walking down Marqués de Caro Street. In a few meters you'll find pieces by Xolaca, the man with the impressive portraits, in collaboration with David de Limón and his very personal black ninja, both of whom recognize the work of the Luisa de Marillac Day Center. Then you'll come across the futuristic vision of how a city is renewed by the work of the trio Barbi, Xelon and Bisser.

Don't leave this central avenue just yet. Go to number 18. It's a public parking lot. You can't find anything? Raise your head and you can see one of the characteristic pieces of Hyuro. This mural pays homage to the scientist Jane Jacobs, within a project of the Polytechnic University of Valencia and the Las Naves Centre to honour in different parts of the city the contribution of women, too often silenced, to human progress. 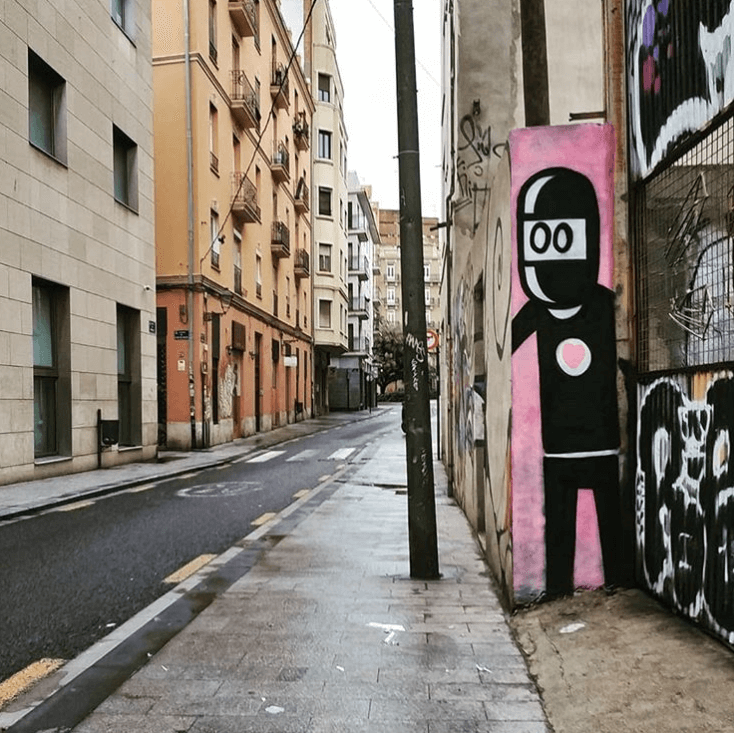 Much more than just painting

Keep moving forward through the oldest Valencia in search of more examples of street art. Any streetlamp, lamppost or wall section can be the meeting point for creators in small format. Because Ciutat Vella also honours sticker designers. It is the territory of the friendly little dog that defines itself as "a good boy", of that mute witness of what happens to be "the photographer" or of the enigmatic lady with multiple eyes.

More difficult to contemplate, since it is a more evanescent but no less shocking form of expression, are the proposals of urban knitting, also known as yarn bombing. It is a kind of wool graffiti as it is covered with this fabric different pieces of street furniture such as bollards or bike hooks that suddenly come to life. This is the case of Raquel Rodrigo, author of what she calls "ArquiCostura" actions that are nothing more than interventions on building facades. Some of her creations can be seen in the Plaza de Lope de Vega or in the Vaqueta restaurant. 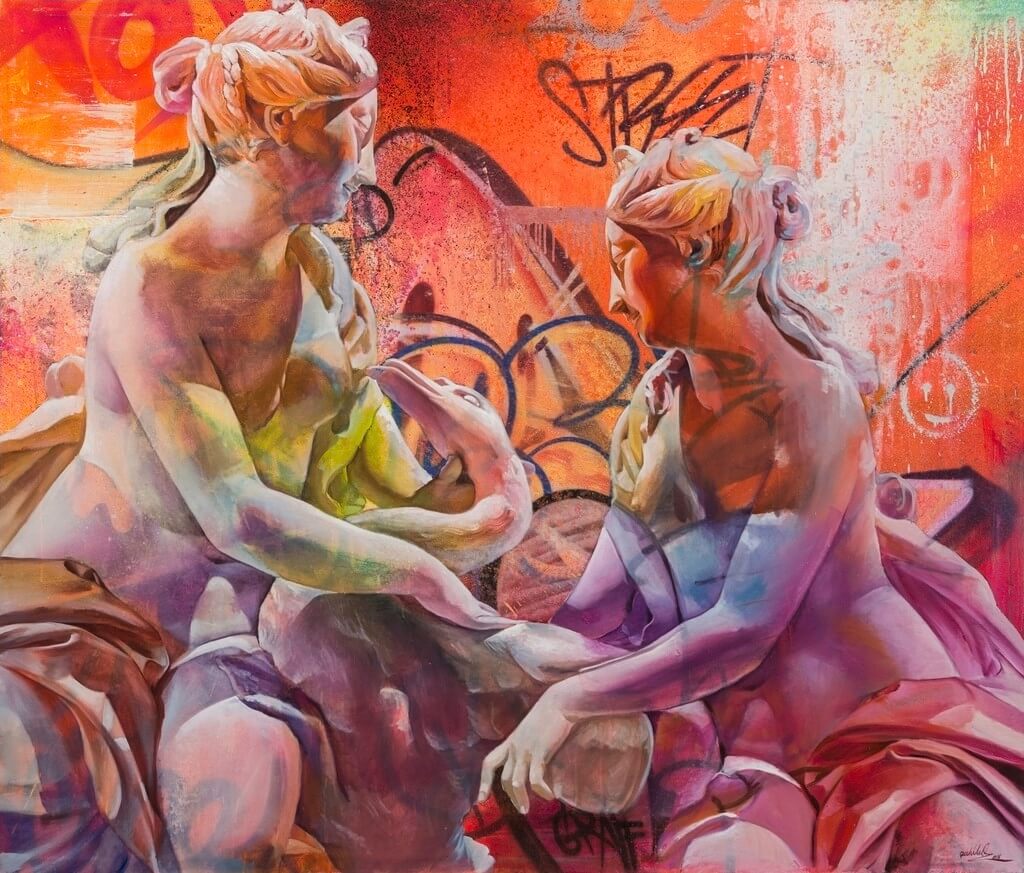 Our end is your beginning

We arrived at the final station of our journey. The surroundings of the market of Mossen Sorell. In a very reduced space we can appreciate a mural of Erica Il Cane where a donkey is thrown with force by snails or the photomontages to great size of Luis Montolio, in which it rescues of the forgetfulness to eccentric but essential personages in the essence of the urban Valencia. Like the one that tells of the ascent to the heavens, on the back of a giant paella, of the vedette Rosita Amores, that sort of Valencian Venus of Willendorf made flesh (square between the d'en Pina and Puríssima Streets).

You still should discover the magic of dozens of creators who continue the path of classics already hanging in museums such as El Equipo Crónica or the Renau of "The American way of life". Now it's time for the Nena Wapa Wapa, the elegant geometry of Disneylexya, the delicacy of Juliet or the visual impact of Deih. The Plastic Murs art gallery has detected the importance of this effervescent activity and has become a pioneer in Valencia when it comes to specialising in all types of urban art. New creations and groundbreaking disciplines are about to arrive. We're sure of it. Now get out there and start discovering them!

Ecotourism in Valencia: sustainable ideas to discover the city