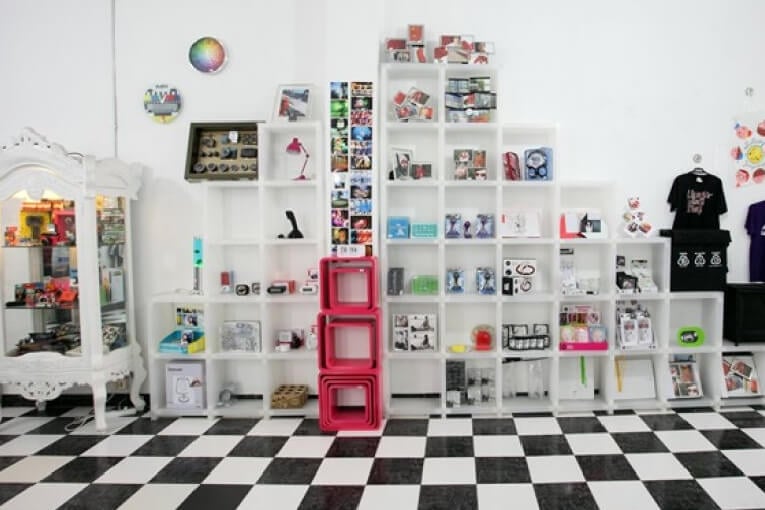 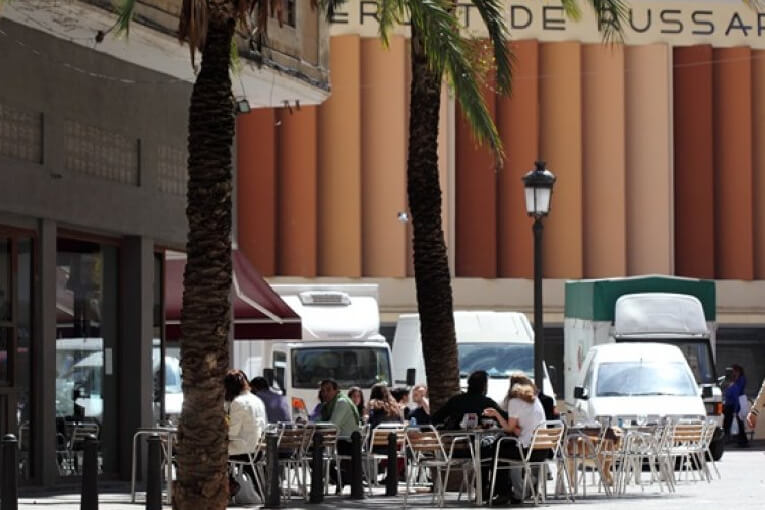 The district of Ruzafa (or Russafa in Valencian) is seen by many as the trendiest, up-and-coming area in Valencia. But make no mistake. This is no hipster haunt trying to be Shoreditch by the sea. Valencians “do trendy” their own way and Ruzafa is the perfect example of a neighbourhood with plenty of character, which copies no-one.

Stretching east from the train station to the Avenida de Peris y Valero, Ruzafa is probably the most multi-cultural and bohemian district in Valencia, home to artists and people from diverse nationalities. The name Russafa comes from the old Arab word for garden, as this is where the Moorish prince Abd Allah al-Balansi built his pleasure gardens and palace in the 8th century. While they are no longer there, this is still very much the area where Valencians come out to play, day and night.

The playground at Plaza Manuel Granero is popular with children, whilst adults prefer to browse alternative shops, chill out at the terraces on Plaza Doctor Landete or hop from bar to bar, well into the early hours. Of course, you will find a number of vintage clothing shops worth visiting such as Kauf Vintage (Cadiz 39), but it is the more alternative outlets that truly define Ruzafa. Try Savage (previously Siemprevivas, onSalvador Abril 19), the women’s fashion brand from designers Adrian Salvador and Lucas Zaragosi, Gotham (Ruzafa 56) for comics or the eclectic Gnomo (Cuba 32) for all sorts of gifts and gadgets. Ruzafa is a place where creativity shines.

During the Fallas festival, streets such as Literato Azorin, Cuba and Sueca are filled with spectacular, award-winning illuminations. And the Russafa Cultura Viva association organises community events like the colourful Carnival or “A les balconades!” (25 May to 11 June this year), when the district’s balconies are decorated with unusual works of art following themes based on sustainability and human rights. Contemporary art can be found in galleries such as Espai Tactel (Denia 25) and Pepita Lumier (Segorbe 7), and also at the Sporting Club Russafa, a former boxing club turned into a space for the arts, hosting everything from photography exhibitions to dance performances.

The brightly coloured Mercado de Ruzafa is the heart and soul of the area. Amidst the buzz of shoppers, you will find stalls piled with mouth-watering fresh produce from the region and beyond (even imported kobe beef from Japan). The Bar Mercado Ruzafa is the perfect place to stop for almuerzo, the sacrosanct mid-morning snack. Ruzafa is a true haven for foodies.

After all, this is where renowned local chef Ricard Camarena based his Michelin starred eponymous restaurant (Doctor Sumsi 4, but soon to be relocated to the new Bombas Gens gastro-cultural hub), as well as the more casual Canalla Bistro (Maestro Jose Serrano 5). There are lots of restaurants to choose from. Traditional tapas bars sit alongside more unusual eateries like La Conservera (Literato Azorin 18), serving just tinned fish. You can enjoy creative cuisine in modern surroundings at Dos Estaciones (Pintor Salvador Abril 28), or in a historic house at El Huerto (Pedro III el Grande 13).

For those with a sweet tooth, Dulce de Leche (Pintor Gisbert 2) coffee shop is a must. The different nationalities that have settled in the area are reflected in the diversity of its restaurants. Doña Petrona (Padre Perera 5) brings together the best of Argentinean and local cuisine from chefs nurtured at Michelin-starred El Poblet restaurant.

You can feel like walking into a typical Kyoto street at Nozomi (Pedro III el Grande 11) and enjoy the Nordic way of life and healthy vegetarian cuisine at Copenhaguen(Literato Azorin 8). Health conscious visitors will also enjoy the Mediterranean cuisine at La Mas Bonita (Cadiz 61) and the organic vegan dishes at Miobio (Cadiz 67). But it is after dinner that Ruzafa truly comes to life as one of the nightlife hotspots of Valencia.

And there are lots of bars to choose from too, from modern craft beer centres like Olhöps Craft Beer House (Sueca 21)to the most unconventional places to meet friends. Try Ubik (Literato Azorin), a bookshop where you can not only enjoy a beer, but maybe learn to play the ukulele, practice your language skills, attend a book presentation or let the kids play at special workshops. Or sip a cocktail – maybe a traditional Agua de Valencia – amongst mannequins, old toys and vintage furniture at La Bella de Cadiz (Cadiz 54). That is the essence of Ruzafa, where the conventional meets the unconventional and everybody (and everything) is welcome.